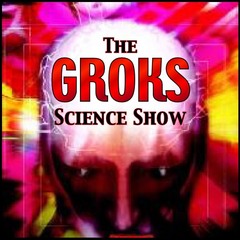 Tachyonradio.com adds another brilliant show to it's lineup. Thursday night at 10.00 pm tune in to a show thats mission is to bring science to the world.

The Groks Science Show is a weekly science radio program and podcast produced in Baton Rouge, LA, Chicago, IL and Tokyo, Japan. The show broadcasts on radio stations across the country and can also be heard as a podcast. Each week, the hosts, Dr. Charles Lee, Dr. Frank Ling, and Samantha Thomas take an in-depth look at recent events in the world of science and technology, and examine the effects of recent discoveries on our daily lives.
Each episode features an interview with a leading scientist, researcher, or industrialist discussing stimulating work in their field. The show often includes a humorous and entertaining segment; plus the world famous question of the week!
Contact us at:
Groks Science Radio Show
science@groks.net
http://www.groks.net

Dr. Charles Lee began his scientific training at the California Institute of Technology (Caltech), where he received his baccalaureate degree in chemistry. He earned his doctoral degree from the Department of Molecular and Cell Biology at the University of California at Berkeley.  He was on the research faculty at the University of Chicago and is currently an Assistant Professor at Louisiana State University, where his research focuses on the neurobiological mechanisms of perception, funded by the National Institutes of Health (NIH).  He is the author of numerous scientific articles, books, book chapters, and presentations, including two popular books: Zen and the Art of Foosball: A Beginner’s Guide to Table Soccer and The Tao and the Engram: Structured Memories in a Brain, which explores current ideas in the field of neuroscience for a general audience. He began his radio career in 1999 as a producer of the Gavin Award-Winning KALX Evening News, and served as a programmer of music entertainment. Together with Dr. Frank Ling, he created the Groks Science Show, which airs on radio stations across the country. He has also served as a science news correspondent for the NPR affiliate, KALW in San Francisco, and has produced a radio documentary on the influence of radio in China funded by the Avery China Foundation.

received his Ph.D. in the Department of Chemistry at the University of California at Berkeley, where he studied the separation of chiral compounds with the renowned chemist, Dr. Jean Fréchet. Frank received his bachelors of science in Chemical Engineering from Caltech and a MS degree from the University of California at Santa Barbara.
Currently based in Japan, Frank has consulted for various US and Asian organizations, including the Asian Development Bank (ADB), Cypress River Advisors, and Smart Wires Inc. Dr. Ling was previously research fellow at the Institute for Global Environmental Strategies (IGES) and at Ibaraki University. He is editor of the book “Climate Smart Development in Asia: Transition to Low Carbon, Climate Resilient Economies” and is a contributing author to the publication “The Energy Revolution Will Save Japan”. Frank has been an expert reviewer for the Fifth Assessment Report for Working Group III of the Intergovernmental Panel for Climate Change (IPCC).
Frank began his radio career in 2000 at KALX in Berkeley, CA as a news producer and music programmer, and he is the co-creator of the Groks Science Show with Dr. Charles Lee. Together, they were awarded a grant from the Avery China Foundation to produce a documentary on Chinese radio in 2003, during which they were featured on China Radio International’s program, Voices from Other Lands. His scientific reports have also appeared on NPR affiliate, KALW in San Francisco, CA. He has received numerous awards for his research and contributions to science education.  In 2006, he received the Mass Media Fellowship Award from the American Association for the Advancement of Science.  He has also been a Mirzayan Science & Technology Policy Graduate Fellow at the National Academy of Sciences in Washington, D.C.
Co-Hosts

Samantha Thomas is an MD-PhD student at the University of Chicago. As an undergraduate, she studied physics at the University of Michigan and maintains a strong interest in the laws that govern the very small and the very large structures in the universe. But she also cares about the health and well-being of certain mid-sized entities such as humans and is curious about the ways that Western medicine can be complemented with traditional approaches to healing. As a graduate student, she studies gene regulation in stem cells and pharmacogenomics. She also loves animals, flowering trees, and David Bowie.

Chenan Zhang has a bachelor’s dual-degree in Biochemistry and Zoology from the University of Florida, a Master’s degree in Marine Science from the University of Texas at Austin, and is in the process of getting a Ph.D. in Epidemiology from the University of Chicago. Chenan’s research experiences include laboratory and field work studying vertebrate reproduction (alligators, geckos, and the Atlantic croaker fish), as well as “dry lab” work studying the role of genetic variants on cognitive decline, and various cancer outcomes. In addition to her involvement with the show, Chenan enjoys tending to heirloom tomato plants on her balcony garden, urban foraging, and fishing.
Correspondents

Dr. Forrest Gulden has a bachelor’s degree from the Pennsylvania State University, a Master’s from Case Western Reserve University, and a doctorate from the University of Chicago. Forrest’s research experiences include stints of archaeological laboratory and field work as well as laboratory work on genetics and neurodevelopment. Forrest has been involved in science outreach with the Biochemistry Society at Pennsylvania State University, with the Volunteer and Education Departments of the Cleveland Metroparks Zoo, and now with the Groks Science Show.

Dr. Joanna Rowell’s science education began at McGill University in Montreal, where she obtained a bachelor’s degree in biochemistry and archaeology. There, while examining skull casts of early hominid species, she became fascinated with the human brain, and wondered how such a sophisticated anatomical structure evolved. To study this question, she enrolled as a graduate student in the neuroscience program at the University of Chicago. She is currently studying the development and evolution of the mammalian six-layered neocortex, or cerebral cortex, which is an extensive brain structure thought to be responsible for the advanced cognitive abilities associated with being human. When she isn’t busy playing with brains, she can be found singing in the semi-professional vocal group ‘Rockefeller Memorial Chapel Choir,’ at her easel painting pictures of her cat, watching documentaries about space, or enjoying a pint at Jimmy’s, the local pub.

Tom Stewart is a Ph.D. candidate at the University of Chicago in the Department of Organismal Biology & Anatomy. He studies how developmental and ecological processes shape the evolution of anatomy. His research explores diversity in fishes and spans a number of fields including paleontology, biomechanics, developmental genetics, and comparative phylogenetics. He is the child of two science educators, deeply passionate about promoting scientific literacy, and excited to be a member of the Groks team. Usually, you’ll find him scheming of ways to escape into nature; hiking, fishing, and rock climbing are all convenient excuses.

Dr. Hoi-Chung Leung is an Associate Professor of Cognitive Neuroscience at Stony Brook University.  She is a correspondent for the Groks Science Show and covers issues and stories related to neuroscience.
Executive Producer

Dr. Elise N. Covic received her Ph.D. in Computational Neuroscience from the University of Chicago. When Elise is not busy knitting, fighting crime or super-modeling, she is busy characterizing the synaptic properties of sensory corticocortical connections using physiological, anatomical and pharmacological methods. She is currently MSTP Dean of Students at the University of Chicago. In her spare time, Dr. Covic is heavily involved with many different science education, outreach and advocacy initiatives, both locally and on a national level. She is an active member of the Society for Neuroscience’s Advocacy, Government and Public Policy network and the Coalition for Life Sciences. She has been invited to Capitol Hill on many occasions to speak with members of Congress and Senate about the importance of scientific research and scientific funding.

TachyonRadio.com is proud to present The Big Picture Science Show as part of it schedule. We are the only UK station carrying this prestigious show.

Monday nights @ 9.00 pm GMT and Friday mornings @ 11.00 am GMT join Tachyonradio.com and The Big Picture Science Show for entertaining science topics brought to you by the people behind SETI. About the Show

A different kind of science radio show.Big Picture Science is a national, one-hour weekly radio show and podcast. Hosted by an actual scientist and an actual science journalist, connecting the hottest and coolest in scientific research and technology with lively and intelligent storytelling.
Each show is thematic.  And as we investigate a subject, we find surprising connections along the way.  But the most surprising thing about the show may be its humor.  Science radio doesn’t have to be dull.
But there’s more.
Are you a doubting Thomas? We separate science from pseudoscience - and facts from the phony - in Skeptic Check, our monthl…